From lanterns and mobile phone chargers to community microgrids, off-grid solar products and services are proving to be the most effective means ever when it comes to bringing clean, efficient and reliable electricity to rural and remote community residents in both industrially developed and developing nations around the world.

A global market study commissioned by the World Bank Group’s Lighting Global Program revealed that $276 million was invested in the off-grid solar industry in 2015, a 15-fold increase since 2012. Some 89 million people in Africa and Asia now enjoy improved energy access as a result.

The roots of the nascent, burgeoning market for off-grid, mobile pay-as-you-go solar energy can be traced to Sub-Saharan Africa, where ambitious young start-ups, with support from the U.S.-led Power Africa initiative, have taken root and are expanding. Grid access is more prevalent in South American countries as compared to those in sub-Saharan Africa and South Asia. Nonetheless, it’s estimated that around 7 percent of the population – some 30 million people – live without electricity.

That rises to 75 percent (for potable water, as well as electricity) in the Peruvian Amazon city of Iquitos, the largest in the world inaccessible by road, prompting pioneering start-ups, such as Power Mundo, to replicate the success being experienced in sub-Saharan Africa and South Asia. 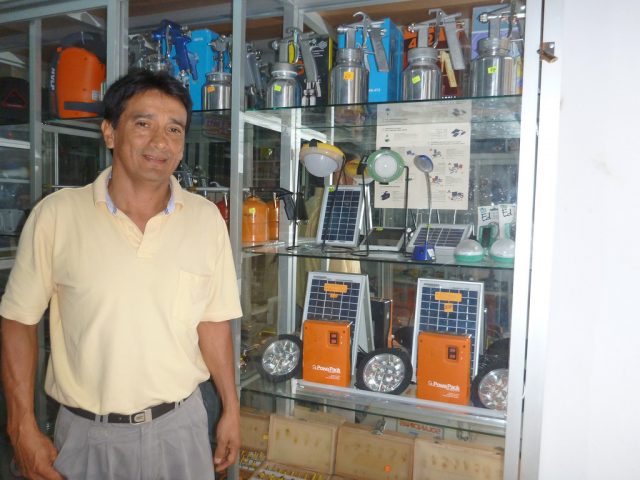 Conceived at Colorado State University in 2007, Power Mundo is scaling up deployments of PAYG, a pay-as-you-go pico solar electronic payments platform in Peru. By allowing consumers to pay for a week’s worth of electricity at a time, PAYG opens up access to emissions-free electricity to and makes solar affordable for those who lack grid access, according to the company.

¨Over 4 million Peruvians lack access to electricity and many Peruvian families at the base of the economic pyramid (BOP) spend more than 10% of their daily income on diesel fuel to fill a lantern to light their home. If more Peruvians could invest a small portion of their daily income towards a solar energy system for their home, they could save hundreds of dollars, protect their families from the risk of fires, live healthier lives, and conserve the environment.¨

The Inter-American Development Bank (IDB) is sold on the solar mobile pay-go concept and Power Mundo’s business model. They’re not alone. IDB and the Renewable Energy and Energy Efficiency Partnership (REEEP) have invested in Power Mundo projects, as has Agora Partnerships and GIZ/EnDev.

With about $100,000 in funds from the U.K.’s Peru Prosperity Fund, Power Mundo and I-Dev International on Dec. 1 announced they would carry out a pilot solar PAYG project in Belén, a traditional Amazon riverside community in Iquitos wherein an estimated 75 percent of residents lack access to electricity and 38 percent live in poverty.

As Power Mundo explains, the main aim of the project is to develop a distribution network for efficient, low cost off-grid pico and home solar energy products that Belén residents can afford while at the same time creating local employment opportunities that can raise residents’ incomes.

They don’t make use of innovative applications of digital payments technology, but the Colombian government is partnering up with private sector solar companies to install solar microgrids in remote communities.