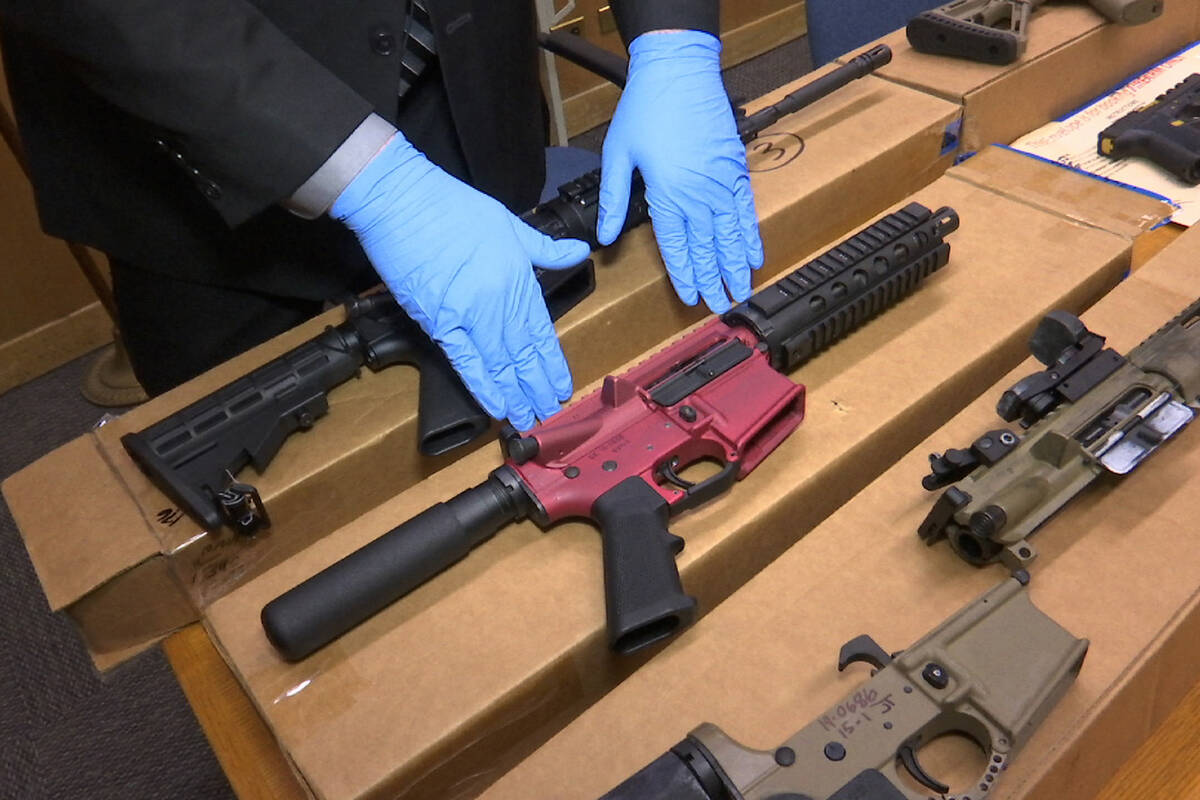 In this file photo taken Wednesday, Nov. 27, 2019, is Sgt. Matthew Elseth with “ghost guns” on display at the headquarters of the San Francisco Police Department in San Francisco. (AP Photo/Haven Daley,File)

CARSON CITY — A district judge in Lyon County has nullified part a new state law banning untraceable firearms assembled from kits, siding with a Dayton-based gun kit manufacturer in finding that sections of the law are too vague to be enforced.

The decision, issued last week after a November trial, makes permanent the ruling Judge John P. Schlegelmilch first made on a temporary basis in July in a challenge brought by gun kit maker Polymer80.

Passed last session, the law bans sale and possession of so-called “ghost guns” made from kits that, in their unfinished state, are not classified as weapons and do not require serial numbers. Gun control advocates say the kits threaten public safety by allowing people who are legally barred from possessing firearms to buy and assemble guns from kits.

But the judge ruled sections of the law that define what constitutes an “unfinished frame or receiver” in a gun kit are ambiguous, with “myriad undefined terms” used. As a result it “fails to establish clear standards that law enforcement can use to determine whether the law is violated,” Schlegelmilch said.

“Nevadans would face the risk of discriminatory enforcement by police and prosecutors alike as they, in their sole discretion and without guidance, could label almost anything an ‘unfinished frame or receiver,’ if it in any way even resembles a firearm’s undefined frame or lower receiver,” the judge wrote in a Dec. 10 ruling.

Schlegelmilch ruled the law’s vagueness violates the Nevada Constitution’s due process clause and barred the state from the enforcing those sections of the law dealing with gun kits. Other sections that more broadly bar possession of weapons that lack serial numbers are valid and in effect, with exceptions for guns that are antique, collectors items or inoperable.

The state attorney general’s office Tuesday declined to comment on the ruling, which the state may appeal. Following the judge’s earlier preliminary finding in July, Polymer80’s CEO David Borges called the ruling “a significant victory” and said the law “targets our company specifically for conducting a lawful business.”

In a separate challenge to the law brought in federal court earlier this year, a U.S. district judge in July rejected a gun rights group’s argument that the law violated Second Amendment gun rights and the Fifth Amendment’s ban on government property seizure.