A gang member with a lengthy rap sheet fatally stabbed a Columbia University student, injured a tourist and threatened another man in an unprovoked knife frenzy near the Manhattan campus Thursday night, police said.

Giri, who is from Italy, stumbled out of the park and collapsed near the corner of West 123rd Street and Amsterdam Avenue, where he was found by cops. He was pronounced dead at Mount Sinai-Saint Luke’s Hospital.

The second victim — a 27-year-old Italian tourist who had only arrived in the city a day earlier — was found with stab wounds to the torso at West 110th Street and Cathedral Parkway 15 minutes later, law-enforcement sources said.

Witnesses told cops the suspect had approached the male victim from behind and knifed him in the back before fleeing, sources said. The tourist was taken to the same hospital as Giri in a stable condition.

As cops were canvassing the area, a third man said the suspect had just threatened him with a knife in nearby Central Park. The man was with his girlfriend walking his dog at the time.

The man, who wasn’t injured, went with cops and identified the knife-wielding suspect, sources said.

The suspect, who was arrested inside the park but has not yet been charged, is allegedly part of the Bloods gang off-shoot, Every Body Killas, according to sources.

The Manhattan man — identified as Vincent Pinkney — has 11 prior arrests dating back to 2012 for robberies and assaults, as well as other alleged crimes, police sources said. He is on post-release supervision until 2022.

He was convicted of gang assault in 2015, joining three other people in pummeling a man and repeatedly slashing him in the face on Linden Boulevard in Jamaica, Queens, two years earlier, according to a criminal complaint.

The victim needed 20 staples to close a gash on the back of his head and another 25 stitches for a large cut from his right eye to the right ear, according to the complaint.

Pinkney served three years of a four-year prison stint, according to state Department of Corrections records.

Cops are now investigating whether a third stabbing attack inside Morningside Park 24 hours earlier is linked to the recent frenzy, according to sources.

In that attack, a man was stabbed in the neck just after midnight on Wednesday and the suspect – who sources say matches the description of the latest perp – fled the scene.

Pinkney clammed up to cops when caught, refusing to speak and asking for a lawyer, law-enforcement sources said. Detectives were seeking a search warrant to test for the victims’ DNA on his clothing, sources said.

Investigators also are reviewing other recent, unsolved, unprovoked attacks in the area to see if the suspect may be responsible for them, too, sources said.

The suspect’s father confirmed to The Post that the 25-year-old has “spent some time in jail” – but claimed he wasn’t “known to be violent at all.”

“I don’t really know if he’s involved in gang activity. I really don’t know where he hangs out,” the father said, adding he hadn’t seen him since earlier on Thursday.

Giri, the slain victim in Thursday’s attack, had been returning to his apartment near campus after a soccer match with his team, NY International FC, when he was stabbed, friends told The Post.

His teammates called Giri a “pillar of the club” as they paid tribute to him on Twitter Friday, saying “Davide was the nicest and brightest person on the team.”

The fatal stabbing occurred just a block from Morningside Park where Barnard student Tessa Majors, 18, was stabbed to death in a botched robbery in December 2019.

Giri was born in Alba in Italy, growing up near Turin in the northern part of the country, where his parents still live. Giri is survived by his parents, and sister and brother.

”This is terrible news which has left everyone shocked,” said family friend Maurizio Marello. “I know David’s family well, they are an example to us all and a very rare type, they are people who have always been involved in working for the community.

“As a father myself, I cannot begin to imagine what they are going through. I just want to express my sympathies to the family at this tragic time.”

Giri had traveled the world and came to the US to study in 2013. He did a master’s degree in electrical and computer engineering at the University of Illinois at Chicago before settling in the Big Apple.

Giri was a Ph.D. candidate in Computer Science at Columbia when he was killed, according to his website.

“He was a quick learner and very curious. He was also a very warm and friendly person, always the soul of the party and ready to go out and have fun,” Giri’s longtime friend, Mattias Mengoni, told The Post.

“He really liked New York,” Mengoni said of his late friend. “He found it welcoming and multicultural. He was very accepting of all people from all backgrounds and New York was giving that to him.”

Alex Starzyk, Giri’s neighbor and fellow Columbia student, was in shock over Giri’s death, telling The Post “I saw him all the time. He was always so nice.”

“He always held the elevator door for me any time he saw me carrying anything up or down the stairs,” Starzyk added.

“It’s so tragic for our intellectual community but also our apartment building. I go to the library all the time at 2 a.m. It’s a sanctuary. It’s devastating to think it’s unsafe.” 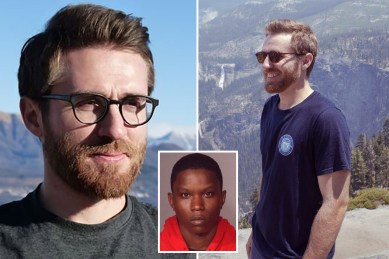 Who was Davide Giri, the Columbia grad student fatally stabbed in NYC?

A neighbor who lives across the street from where Giri was found told The Post the area isn’t safe at night.

“Violence and homelessness around here has worsened ever since [Mayor] de Blasio opened the jails. It’s open season.”

Murders in the Big Apple have kept pace so far this year compared with the same period in 2020, with just three fewer homicides as of Monday, 433 vs 436, according to NYPD data.

“I write with great sorrow to share the tragic news that Davide Giri, a graduate student at the School of Engineering and Applied Science, was killed in a violent attack near campus on Thursday night,” Bollinger wrote.

“This news is both unspeakably sad and deeply shocking, as it took place only steps from our campus.”

what to shop now